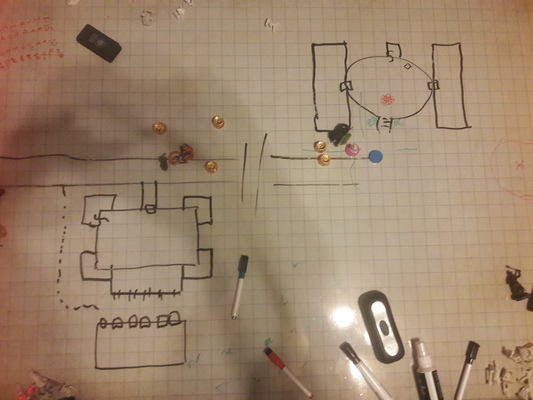 As we left the party, they had just returned to Restenford after defeating the wererats, facing down the wraiths, and redeeming the priest of Bone Hill. Barron and Amathar trained with their spells. The unpredictable results of Barron’s magic struck again – first infecting Amathar with a magical fear of Barron (causing him to flee to 60 feet away and observe through a telescope), then summoning a Watery Double from a nearby pond that tried to drown Barron but failed. The final wild surge caused the half-elf to fall madly in love with a tree.

After consummating his passionate act of love with nature, Barron was entrusted with the pearl necklace captured earlier. Pyrcival accompanied him, and the pair met with the town smith, appropriated named Smyth, who displayed a sign outside his shop indicating he would act as a fence for stolen goods. Smyth agreed to sell the necklace on the party’s behalf for 3500gp. He also agreed to size a set of plate mail for Pyrcival’s smaller form.

After some discussion the party decided to investigate the map Barron found among the wererats. The map bore a mark labeled “Home Inn”, located to the northeast of Restenford near a fork in the river. They followed the road to that point, finding an inn – almost a small fortification, really, with towers and a barracks in back. Inside, something else seemed a little off. The serving wench didn’t know her ales; the only meal on offer was stew; one of the guests, a priest, had his robe on backwards and didn’t know his religion very well. Eventually the group finished their stew and announced they were leaving, asking around among those staying there for directions to avoid the bandits that had been frequently described. A dwarf spoke up – while drunk, he suggested a nearby cave by the side of the road would be a good place to stop and spend the night to avoid the bandits.

Recognizing the trap, the party chose to spring it. They found the cave, conveniently marked by a large tree, with the entrance among the roots. Searching it, they found clear evidence that the cave had been used as a shelter of some kind – another barracks-like area, and some interior doors installed into the cave walls, including a secret door that perhaps had held a treasury at some point (a few small coins were left there). The cave was unoccupied for the moment, so the party set up their own ambush for the ambush they expected.

Their plan was simple: light a fire, leave Leah there to pretend the cave was occupied (with several of her arrows enchanted by Barron), with Thic Duc waiting in ambush, and leave the rest of the group outside under invisibility spells. The plan is somewhat disrupted when the smoke from Leah’s fire begins to fill the small cave.. even though it had vented perfectly well before. A closer examination showed that the entrance was slowly constricting… almost as if the tree roots were moving closer together. Both left the cave before the entrance trapped them.

Outside, the party saw three groups of people approaching from three separate directions. All were armed. To their left and right on the road, two groups of two swordsmen and two archers, each group led by a familiar-looking warrior in heavy armor. The third group was smaller, but the leader wore a strange armor that resembled reinforced plates of bark. The druid spoke first: “Who dares bring fire to the heart of the great tree?”

Tiberium tried to negotiate. The druid demanded the party surrender their possessions to pay for the damage they had done with their campfire. Tiberium thought that was a bad idea. The druid brought the tree to life, two heavy branches reaching down to the ground on either side of the cave entrance in a threatening manner.

Unfortunately, Thic Duc was hiding in one of those spots. Startled, the heavy branches reached out and entangled him. With that, weapons were drawn and hostilities engaged in.

The druid opened with Entangle, wrapping Leah, Pyro, and Thic Duc in living vines. Thic Duc sighed inside and complained that this was overkill, which offended the tree still holding him captive. The tree began to squeeze the laconic monk. Having been handed a monk, there was going to be monkade.

Meanwhile, Leah took a few steps forward and launched her first arrow at the druid. With a shrill cry a hawk flew from her bow and attacked the druid, drawing blood. Amathar, who had been invisible from the beginning, cast an obscure spell that created a ghostly pair of hands. He filled those hands with bandages and set about healing those in need of his aid.

Tiberium intercepted one of the groups led by a familiar figure from the inn. A well-timed spell from Barron knocked out the two melee fighters, but left the archers and their leader on his feet. The protege paladin fought well, but the heavyset figure in plate mail just wouldn’t die. The fight dragged on as they exchanged blows.

The druid began his next spell, chanting an incantation even as the hawk swooped down to attack him once more. The druid fell, severely wounded, even as the hawk took to the air once more in search of new prey, charmed by the druid’s spell. It chose Pyrcival, even as the gnome closed in on the bleeding druid, having finished off the two archers flanking the nature priest.

Meanwhile, Leah was splitting her attention between the druid, the tree limbs stomping the stuffing out of Thic Duc, and the oncoming foot soldiers. As with Tiberium, the leader was surprisingly tough. His minions, however, fell rapidly to a combination of arrows and Amathar’s magical slumber.

Of the bandits, their corpses were readily recognizable as people from the inn where the party had briefly stayed. In particular, the dwarf who gave them directions to the cave, and the bartender. Some of the others seemed familiar as well. Oddly, only the druid had money on his body – 7 gold coins.