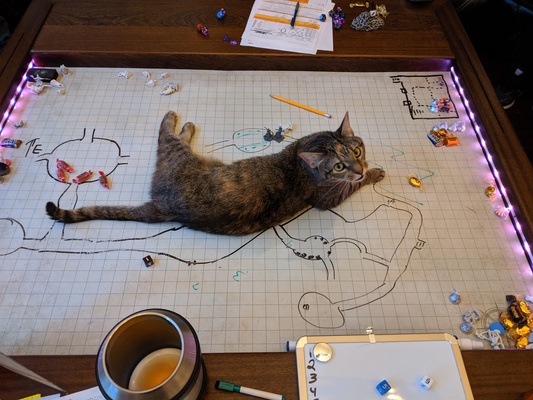 As we left the party, they had defeated an assault by some sort of repulsive sewer larva from one side and an army of ants from the other. They defeated the ants and decided that discretion was the better part of valor with the larva. However, there are telltale insectoid noises coming from deeper into the ants’ nest, the larva still block that path forward, and From the Diary of Pyrzival the Tutor

I’m not overly fond of bugs, in general. They’re useful teaching tools sometimes, pinned to little wood boards, of the differences in species. That said, ants the size of dogs and human / ant hybrids (is there anything a human won’t breed with???) are something altogether different. So after the last attack of many ants, we venture down the corridor, with the ants (being an altogether better option than wading calf -deep in an acidic crapwater mixture. We get to the end of the corridor, closing small entrances along the way, and venture into the opening to a larger rough chamber – where we encounter four ant-human hybrids, each with four arms. Disgusting. Potentially dangerous since they each are carrying two shields and two swords.

I politely ask if they’ve seen an orc carrying a half-elf through there, and they sick a bunch of giant ants on us, and accuse us of polluting their nest. No hospitality at all. So once again, we strategically retreat to a slightly more narrow area where the kid, myself, and the apprentice establish a skirmish line, with Leah the ranger picking off especially dangerous foes behind their lines. This goes on for a while, and we manage to prevail, but it’s a significant challenge as the hybrids are well armored and difficult to lure in close enough to kill. They had also sent a small group of worker ants around back to try and take us in the rear, but the monk and ranger held them off.

After the fight, we investigate the corridor branching off the chamber to the right, and find stairs leading up, and another chamber with pits for holding grain. We try the left corridor, and encounter a room filled with rotting vegetation. The monk takes this time to jump into it (I didn’t really see), and gets covered in an even more disgusting creature – something I’d only read about – rot grubs. Quick thinking with a torch kills some of them, but Tib and I have to dig the other two out of his body before they reach his heart and kill him. It takes a while, but between us, we get the job done using surgical tools made from improvised lockpicks (why does a religious man carry lockpicks?). While we’re dealing with the grubs, a grey ooze attacks the cleric, and then Ahira the apprentice fighter, and knocks her unconscious. I drag her back out of it, and the ooze is dispatched.

All in all, I hope Barron is doing ok, as the rescue party is, at this rate, never getting there! Of the Fourth Sunday of the Harvester (Part III)

Though I can’t see it, the sun must be well down. We’ve been in these wretched caverns for what seems like a month, with no end in sight. After resting briefly, we forged ahead into the complex. Exploring the area from where the Giant Ants had come, we came upon a large chamber, with four or five small tunnels stemming out, no larger than a smallish gnome (or a Giant Ant). Feeling we ought to ensure we’re not caught from behind, it was decided we’d collapse these passages. All closed but one, a loud ‘chittering’ could be heard above the din of falling dirt. Taking a few steps forward, the next grotto came into view, revealing four large ant-men, and uncounted other Giant Ants (some smelled strongly of peppermint, strangely). I backed away slowly, hands out to show I wished them no ill intent, but they quickly began streaming forward, with the ant-men staying to the rear with bows. Despite my best efforts, the instectoids weren’t to be reasoned with, and we were forced to defend ourselves. I take no pleasure in recording that we may have eliminated the entire hive, so thorough was the slaughter. We took casualties, as well, but were able to get everyone back up to fighting shape.

Finally recovering from a quite heavy battle, we began to further penetrate the hive system. Eliminating several dead ends, and finding several of the larvae encountered previously (still cocooned, but with the same awful odor), we wandered upon a final ‘man-sized’ ingress. Several hundred yards forward, we passed through a narrow room with ditches to the side. Seeing no threat, nor items of interest, Pyrz and I continued through. Thic Ducc, however, had been curious about the skins hanging from above. As they’re quite out of our reach, he opted to use a rope to pull one down. In so doing, however, he lost is footing and fell into a trench. He immediately stood, but all saw a horrific sight: Rot Grubs burrowing into his flesh. Thinking quickly, Ahera was able to bring her torch to bear, and burn one off. TD, fighting panic, doused his arm in an oil, then set it alit, killing the remaining (visible) grubs. Two had burrowed into his arm, however, and were surely making way to his vitals. Thank Pelor for my medical training, as I recalled from those lessons that Rot Grubs, when internal, are treated much as a disease. Whispering a devotion to the Sun Father, I felt His power flow through me and into the monk. The grubs dead, it still seemed prudent to remove them. With Pyrz’ steady hands, and my own moderate training, the two of us were able to cleanse TD’s body of that filth.. though painful, I can’t imagine the horror of having those things decaying in his person.

Because this infernal cave clearly hates us, however, as Thic Ducc recovered and we began to prepare to default, we were set upon by a huge gray ooze. Though it was put down quickly, I’m afraid Warren may need to buy new boots. What hateful beings await us, I can only guess. We’ll move again, soon. Diary of Barron the mad (limited release gold edition)

Well it’s been an interesting couple of hours. After spending many of them dodging spears they finally found me. Rather than out right gutting me, they offered a alternative of living. Being unable to invest my vast horde from the underworld I agreed. After spending some time with my new guards, I managed to do 3 things…first I learned some interesting facts about orcs and some orcish recipes from orc quarterly(perhaps malog isn’t so strange after all). 2nd I learned I’m more valuable alive than dead(obviously but I was concerned they did not see it for a moment). 3rd I through the use of my cunning and charm I convinced the orcs I could turn all their copper to gold. I struck a deal in which I would buy my freedom. I told them I needed my book, to which they refused but agreed I did need my book to do said magic. A compromise was reached in that those savages literally ripped a page out of the book and handed it to me. Note to self….add book repairs to growing bill to be sent to the dungeon manager. I almost even convinced them to just let me out, but admittedly I wouldn’t have believed me either. So I extravagantly cast the spell. But that’s when it happened. There was a weird noise almost like a piece of small high speed metal ricocheted off a wall. Then my greats dreams and yet nightmares at the same time came true, as I turned myself to gold. Con: I’m gold, how will I eat, how will I poop, I’m unaware of my own value, and how can I protect my treasure when I am myself treasure. Pro: I’m gold, i will be pooping gold nuggets, being a statue sure is peaceful, might have discovered a way to live forever. Diary of Leah the Silent

I don’t have enough alcohol to deal with this day so I’m turning to writing this to cope. Let’s take a step back and acknowledge that my closest friend is also the point of stress. Despite all his faults(and there are many), he has saved my life many times, and me to him. Yet again, I left him unsupervised and he managed to get himself in trouble. This time he used that chaotic mage he somehow learned and swapped places with thic duc who was recently kidnapped. Now we head under ground in pursuit. I hate being underground. Progress is slow, and we keep getting attacked by giant ants. Next thing I know we are surrounded by ants, and ant people. Being at expert with nature I quickly identified some of the ants as poisonous, and readied my bow for action. The more talkative members of the group attempted to talk our way out. This ended in a fight as usual. I dispatched the poisonous ones with extreme prejudice. That’s when one of those ant men took a shot at my face. I caught it with my hand, and got a splinter. I then pointed his arrow at the one who shot at me so as to let him know I shall be returning his arrow. Not being one for lying, I promptly made good on the threat and planted his arrow into his face. I am a firm believer in the double tap, so I send one of my arrows as back up. He went down. At this point I realized I was running low on markswoman fuel added topped it off with a good swig of whiskey. This where they tried surrounding us, but that weird bird Barron bought sounded the ambush alarm. Bad tactical move against this party. We do our best when we are surrounded and can’t retreat. I reaimed to the back to help thic duc hold the rear. Though it seems the ants in back were not a squad and kept falling on each other. Between my arrows and thic ducs fist, we made quick work of the rear line. I went back to the front to dispatch more of the smack talking antaurs. Took an arrow for a souvenir. After exterminating the ants, we moved up the corridor and found a new horror as thic duc decided to reach under water and discovered rot worms. His solution was lighting him self on fire. Barron is not even here and I am putting out fires. Speaking of, my experience with the aforementioned fires from Barron did teach me how to extinguish flames with out even burning the clothes used. Then Warin discovered an acidic grey ooze by standing in it. That could have gone better, also they apparently eat arrows. I sincerely hope Barron hasn’t done anything stupid like turn himself into a statue as a means to try and escape. We might be awhile, so hang in there B. 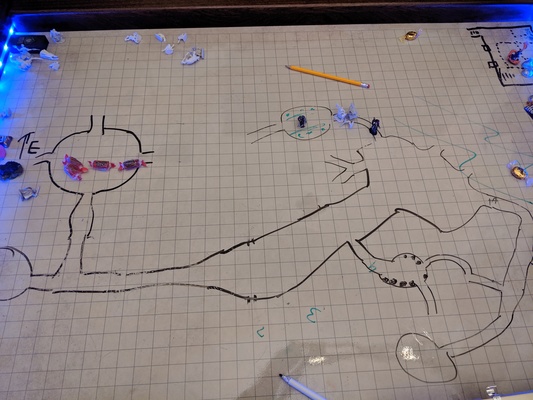 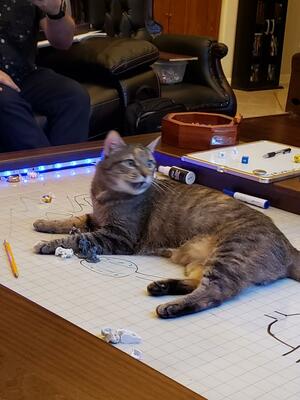