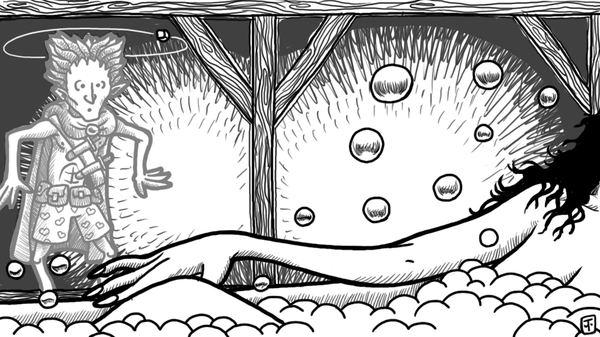 As we left the party, Thic Duc was in hot pursuit of the Princess, while Leah mourned Pyro and Amathar read through the slavers' paperwork and prepared the rescued slaves for departure.

Thic Duc returned to the rest of the group after an hour or so, reporting that he had lost the Princess in a small town named Garrotten. After mourning their fallen companion and allowing Amathar and Warin time to arrange an orderly departure for the papers and the slaves respectively, the party proceeded to Garrotten and made inquiries at the town’s largest and best – and only – inn. The establishment had four rooms to let, and one already claimed; the party took the other three and inquired about a bath to clean off the sewage. Unfortunately, the bath had already been spoken for… all night, in fact.

Careful questioning, enhanced by gold, bought more information about the other guest – a woman who had paid not only for the best room in the inn, along with exclusive access to the bathing facilities for the whole night, but also for discretion… the innkeep did better with the first two than the last. Several of the party promptly trotted over to wait outside the room the inn provided for bathing, hoping for a glimpse of the Princess they sought. Eventually, they forced their way inside, claiming to be servants of the Duke authorized to return the Princess to her wedding. Although most of the party respected her delicate feminine nature, Barron got an eyeful of the Royal Jewels when he slipped into the bathing area while invisible.

Thic Duc decided to put his recently-acquired immunity to disease to the test by refusing a bath. Instead, he broke into the room the Princess had rented for the night and removed her traveling clothes. These were ripped into several pieces by the slaves to improve their rags. He searched the room for more possessions, but failed to find anything incriminating or dangerous.

Warin negotiated with the innkeep to obtain blankets to supplement the garments available to the slaves, along with water for cleaning them up a little bit. The innkeep sent one of his barmaids to help, who seemed of a friendly disposition and inquired about the party’s adventures. Blushing, Warin turned down her invitation to join him later.

Having obtained the Princess, the party promptly polymorphed her into a falcon and took 5 days of vacation to train. Found in the slavers' paperwork

Upon careful examination of the papers, it appears the party is faced with a choice. The slavers' papers detail a caravan route for their vile “product”. The stronghold you have captured was the final step before broad distribution via a vast undercover network that extends deep into all the nations bordering the Nyr Dyv, even those of generally good and lawful inclinations. Though their operations were clearly illegal in such lands, it seemed to neither trouble them nor stop them. Their ledgers provide delivery schedules and notes, particularly concerning the type of product desired – ranging from “exotic brothel candidates” to “hard labor” to “virgin sacrifices” to “well-fattened succulents”, a few entries requesting specific skills such as “gladiators” or “sailors”, even a few requesting “monstrous beasts”, and a single entry requesting “a dozen breeding pairs of noble lineage”. The names of the buyers are clearly aliases, but there is information given on methods of contact. The buyers are widely separated, and bringing them all to justice would be a difficult and time consuming task with much travel… but there is clearly a well-established conspiracy of slave trafficking among the rich and powerful in lands supposedly civilized.

However, the paperwork also details information about the source of the “product” and the route taken.

There are some familiar stops on that route. Saltmarsh is mentioned – but recently crossed out, with a fresh mark on the map to the west of that town. Though the map is sparse on details, it is likely the sahuagin lair. The ledgers detail this as both an alliance, a source of product (captured sailors, perhaps from pirate activity?), and a resupply spot where slaves are transferred from a land caravan to a smuggling vessel on their way to Highport.

Darkshelf is also mentioned, with a question mark next to it. There are no recent entries referencing that location, and it appears some were expected but have gone missing. Their product was slaves suitable for “hard labor”; trained to work without complaint or making trouble.

The bulk of the product, however, travels overland from a fortified keep on the outskirts of Rookroost’s territory within the bandit kingdoms. It’s not clear from the paperwork whether the keep has official status with Rookroost or whether it operates clandestinely. It is also clear that this keep is not the end of the line; it’s merely the last step in the route used by the caravans sent to and from the Highport area. Disturbingly this keep appears to receive large numbers of “well-fattened succulents” and “virgin sacrifices” captured in the shield lands. Apparently well-fed virgins are rare in the bandit kingdoms. The exports from this keep are marked for hard labor or exotic brothel services, with the occasional beast or gladiator. Diary of Tiberium the Third – Of the Fourth Freeday of the Harvester

These past days have been difficult. As I sat to write last, our beloved companion, Pyro, eased into Pelor’s light. Ever Leah’s faithful friend, we built a pyre for him, where we laid him to rest, as did my fathers of old. May we meet again, Pyro, and ‘fetch’ in Pelor’s graces. Good boy.

Unfortunately, our days continued to be trying. After Thic Ducc was unable to keep pace with the fleeing woman, he returned to tell us of a village some kilometer or two away. As we are in sore need of a rest and wash, we elected to make for ‘Garrotten’. There, we found a small inn and tavern. The establishment has 4 rooms, and a bath, but the more lavish room (as well as the bath), had already been rented. When pressed, the innkeep allowed that his renter matched our description for the woman who’d escaped, whom we believe to be the ‘princess’.

After much discussion (and consternation), we finally found the lady not in her room, but in the bath (for hours). She had been initially resistant, showing a frustrating level of petulance, to the idea of being escorted back to her betrothed. She claims she’d been kidnapped at sea, and had convinced her captors to free her. Though unlikely, this is possible – Barron, for example, seems especially entranced by the woman.

Regardless, Barron she agreed to allow Barron to cast a spell on her, changing her form to that of a hawk. Leaving at first light, we made for Restenford, and asked the captain to make ready her ship. There is some talk of taking a week here, to prepare and train for further work, but I believe we should push forward, and allow the Duke to sort out his house – and reconsider his choice in spouse. Diary of Pyrzival the Tutor

Well, we caught up with the Generals daughter, and I must say, she seems to think she’s a princess.

I’m not entirely sure she’s not just a ditz who plays on her good looks to take advantage of people.

To recap, though. After we slew the slaver leaders, we gave the fallen wardog Pyro a pyre and fiery farewell, as befitting his name. We then made our way to the nearby hamlet Thic Duc had found, and checked into the inn. The stables did not contain our missing horse, but the innkeeper said his best room and bath room were both rented for the night already. We rented the other three rooms, and moved our money up from the cart. The priest took care of the released slaves, we gave them gold and told them to be on their way.

Well, we suspected the missing lady might be in her room, but it appeared empty, so I checked the bath room, and sure enough, it was occupied by her. We eventually went in (Thic Duc did), and setup a schedule after telling her we were there to take her back to her betrothed.

She did not seem happy, and complained. A lot. Like a spoiled whiny human child. Obviously a high maintenance woman. Barron convinced her to let him polymorph her into a hawk for easy transport, and we made our way to Restenford from this unfortunately named town of Garroten. Once in Restenford, we relaxed a little, and set about with some much needed training.

Ahira, now proved in battle, has graduated from her internship, and I gave a brief speech about how she is now a full fledged party member.

About the lady – Thic Duc thinks she’s a slaver, but I suspect if she were really a slaver, she would not have stopped at an inn for a bath so close to pursuit. She’d have been smarter about it. We will see…