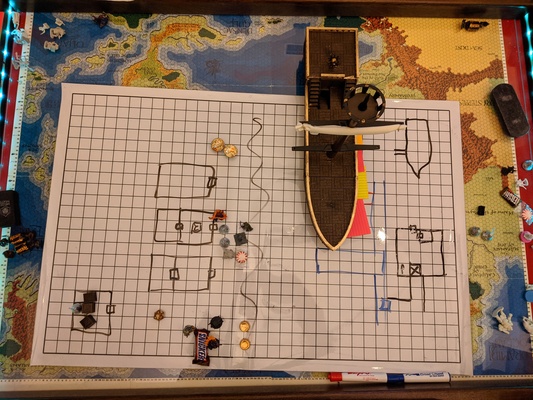 Chris (Tiberium and Seb), Matt (Barron), Coby (Warin and Gunnar) and Mariel (Leah) are returning cast members. The DM took over Kindjal, a young officer in the Duke’s guard, as a temporarily necessary NPC.

We left the party having arranged to smuggle “figurines”, apparently a code word for slaves, into Highport. Among Barron’s hired crew turned out to be a halfling named Seb, who was more than willing to lend a helping hand beyond the usual shipboard duties. They met the customs inspector they had suspected, and he made a show of doing the proper paperwork without actually inspecting their goods or taking any money towards taxes. He directed the ship towards a secluded dock with a nearby hidden door, and said he would return at dusk to unload their cargo. Kindjal said that would be enough to arrest him for corruption, but the party wanted more evidence of his nefariousness.

They waited until dusk, when the inspector returned with four men – two laborers and two in armor and guard uniforms. They unloaded the ship without incident. Barron and Seb stealthily followed their crates through a short passageway into a warehouse, where the crates were left alone for some time. Taking the opportunity presented by a napping inventory clerk, Seb climbed into the man’s office and searched his paperwork, finding a number of other “figurine” deliveries along with a great deal of normal inventory records. Then Seb tied the man’s shoes together before leaving.

Shortly thereafter, the clerk was awakened by a loud noise from within one of the crates. At first, it was a simple banging. Then gradually it turned into a man’s voice shouting for help. The confused clerk investigated, and finally located the crate the noises were coming from: one of the creates that the party had loaded from their ship. And within was a man they knew: Gunnar, who had somehow taken a wrong turn and fallen into a crate and promptly taken a nap before it was nailed shut.

The confusion was sorted out without great difficulty, and Seb took the opportunity to conduct a more thorough search, finding a trap door within the warehouse (under the clerk’s shed) that led to a small room with a few coins on the floor. He took the coins but found nothing else of new interest.

Eventually, the party left the warehouse and regrouped inside a local bar to catch up with Gunnar. Barron lingered in the warehouse longer than the others and was still present when a group of laborers arrived to deliver goods. They were met by the clerk, who – after some initial confusion – gave them a delivery order for the crates of “figurines” to the Prawn Shop.

Later that day, the party went to the Prawn Shop to pick them up. That went… almost without incident. One of the crates… quacked. Repeatedly.Upon being opened, a Uniduck was found inside. No one admitted to knowing how the animal had gotten there, but Barron convinced the shop owner to buy it for 90gp along with a promise to convey profits from a sale above 1000gp to Barron (Shopkeeper rolled a natural one resisting Barron’s bargaining). Barron threw in the figurines as part of the deal.

With the smuggling transaction completed, the party proceeded to the custom’s inspector’s home to arrest him. That too went without incident, although he may have cast a spell before being arrested. It appeared to have no effect. The two people in guard uniforms with the inspector at the time of his arrest left peacefully when the party found the trap door, though one of them slugged Barron in the face to interrupt his spellcasting. Barron claimed (without much credibility) that he was trying to cleanse the room rather than charm the guard.

The trapdoor in his front room, as described by the ladies of the evening to Tiberium, was present but magically locked. Barron studied for two hours to open it with Knock while Tiberium and Warin summoned spiritual advisors to cleanse the room below of evil magic. Because the building itself wasn’t particularly valuable, they used a field expedient remedy: burning everything.

Although the custom’s inspector is no longer inspecting customs, he never did arrive at the Highport jail. Of the first Moonday of Patchwall

Today, I understand the joy Philus felt. This night, we have ended the threat of the vile Inspector, whom I had identified some four weeks past. After Barron, Leah, and some paid help had secured the needed evidence, our contact within the guard was able to arrest the perpetrator. His name shall not stain my memories. He was unresistant (and unrepentant) when we arrived to place him in the hands of the authorities, and marched to his fate.

As we waited for additional investigators to sweep the man’s home, Warrin stumbled on the trap door I’d been warned of. In the cellar, I found all just as described by his victims: a large stone tablet, still smeared with the blood of some unfortunate soul, runes of binding drawn to keep evil held in it’s circle, and other implements of summoning. The place reeks of evil and demonic activity. A cleric of Pelor arrived, to confirm the sense Warrin and I have, so that our own bias may not be a major issue in court. While looking below, there was a small scuffle, of which I’m still confused. It seems Barron may have been casting some spell, which a guard took to be directed at himself. Taking caution, the guard struck Barron, and stormed out. Barron insists he’d been attempting to cleanse, or in some way invalidate, the evil here (I confess, the ways of wizards still perplex me).

Regardless, the threat is ended, and the coming wedding may be finally commence in peace, with the warmth of Pelor surrounding us all.