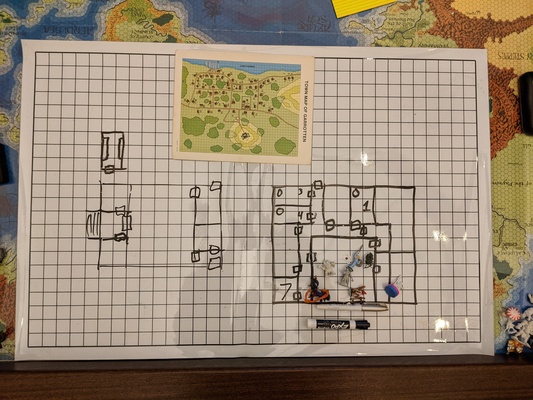 We left the party dealing with a paralyzed half-orc and his hammer. With the help of the local guard, they carted him to the church and inquired about possible remedies for the (presumed) cursed weapon he carried. Unfortunately, the item was quite powerful, and it would take time for the clerics there to pray for the spells they would need. Before the prayers were finished, Krak recovered from his paralysis and left – with his hammer – to look for the paladin in the nearest tavern. Tiberium, overhearing the search from a nearby enclosed chamber, felt that discretion was the better part of valor. Krak left with the newly arrived Barron and Leah in tow. The trio seemed to get along just fine.

The distraction allowed Thic Duc to examine the inn’s guest book, obtaining a list of names of the employees and guests (including the party) along with charges for food and drink. (See Amathar’s notes for details)

Back at the church, Warin and Harmin finished memorizing spells and went to the tavern to try to separate Krak from his hammer. Krak had been reasonably jovial with Barron, Leah, and Thic Duc, even teaching them drinking songs in Orcish (“99 dirty green elves on the wall, 99 dirty green elves… take one down and spill the guts on the ground, 98 dirty green elves on the wall…"). Krak also shared his sad tale of watching his parents and tribe get slaughtered by paladins as a child, who spared him only because of his half-human ancestry (“The stinking hypocritical racists!"). It was during the slaughter that he claimed the shaman’s hammer and swore vengeance against all paladins. Despite that, he seemed jovial enough, if a bit rough on the tables… but when Tiberium and Warin deliberately called attention to themselves, Krak got up immediately to attack them. Harmin and his aide tried Hold Person and Remove Curse, but the latter failed when Krak dodged out of the way. Fortunately the Hold Person took effect, and Warin’s Remove Curse separated the half-orc from his hammer.

Amathar examined the hammer, noting an inscription in Orcish: “Whomsoever bears this hammer, and is worthy, shall wield the power of Gruumesh.” The priests added that the hammer definitely radiated both strong evil and chaos. Destroying the hammer would take some effort, but at least the half-orc Krak was free of its influence. Amathar wrapped the hammer in blessed cloth and using Bigby’s Dextrous Digits to place it on the roof of the church.

When the second hold person wore off, with Tiberium and Warin out of sight, Krak wandered off in search of his hammer. He seemed calmer, without it and without a paladin in sight, but whether he would stay that way remains to be seen.

Speaking of Tiberium and Warin, they had followed an acolyte of Osphrem back to the temple, where Harper had ordered an octopus for his lunch. Tiberium gently interrogated the old man, learning that he didn’t travel much, was capable of powerful spells, claimed no grudge against the duke, and appeared to be going mildly senile. Also, when his octopus arrived cold, he had it placed on a birdbath visible from his window, and called down a Flame Strike to warm it. Harper offered to memorize a spell that might help with the hammer, and set the price by spinning four wheels of chance set into the walls of his quarters. Tiberium promised to come back later if they needed a spell.

Amathar is maintaining a list of clues. Tiberium’s Journal Of the Second Waterday of Patchwall

Garrotten is a strange, confusing town. 1/10, do not recommend. I’ve discussed our situations with the High Priest, Harper, to surprising stagnation. I’m beginning to think the man, while clearly favored by Osprem, may have lost his mind. Having secured the accursed hammer from the deceived half-orc (poor man believes paladins would slaughter his people, merely on account of being orcs and half-orcs, including women and children. A sad tale, but clearly invented by some evil power.), we’re seeking to have it destroyed (or safely contained). Harper, or his man Harmin, may have the power to destroy the thing, but have shown curious reluctance to act. A powerful destructive artefact sits in their hands, but they’ve no urgency to rid their community of it’s evil. I’m truly taken aback. Warrin and I may have to take this into our own hands, and find an acceptable path forward.

To more merry tidings, today we celebrate the Feast of Balmore! Warrin doesn’t seem familiar, but I’m glad to help spread the celebration! The Church of Pelor recognizes the Feast of Balmore, signifying the turning to good of Balmore, a mage of great power and greater evil. The man had been without regard for his fellow life, rarely leaving his lair. In events long lost to history, however, he saw the futility of living for self, and gave his life to rescue dozens of nearby townsfolks from a forgotten catastrophe. As he passed, the sun of Pelor shone brightly upon his dying breath, and he sang a final hymm. Pelor welcomed him in his arms, and sits with Balmore still. Now, on the 12th of Patchwall (today), we celebrate by offering small gifts to those to whom we’re closest. As such, I’ve given each of my companions a token: