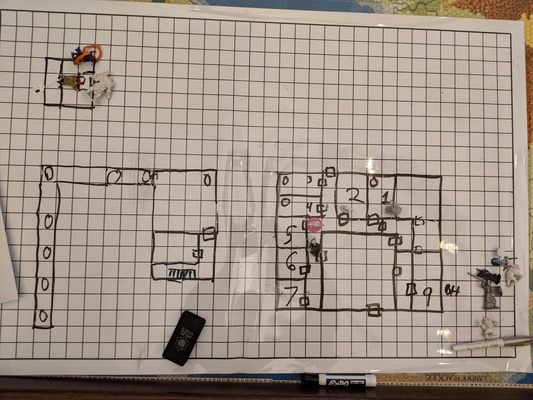 We left the party having watched a play (Tiberium, Thic Duc, Pyrcival, and others) and contracted for an assassination (pretty much just Barron) with “Captain” Basmar. Just as the audience was leaving, a female half-orc wandered into the inn and demanded they bring her all the steak available, and shortly thereafter, fell asleep.

The party decided to explore the hidden passages beneath the inn. Starting in room one, they found passages leading to each of the other rooms, labeled with room numbers. They also located a secret door into the rest of the inn’s basement, including storage areas and a trap door leading upwards into what appeared to be Abraham’s quarters. Pyrcival, Barron, and Amathar explored, with Barron using the Princess' ring to turn into a rat and/or midgit. It was in rat form that he explored Abraham’s room (after having much difficulty moving the bed out of the way). Barron found a backpack in the middle of being packed, and stole the coin purse from it. On a nearby desk was a letter, in progress, referring to Highport. He also found a shelf of books (some on swordfighting, some on economics, some recipes, and one on “the power of the mind”). There was a chest placed near a painting of a tiger; when Barron approached the chest, the painting came to life and roared loudly twice, enough to summon Abraham and friends from the common room.

The investigation failed to find Barron himself and eventually the inn calmed down once more. The party began preparations to retire for the evening, when Barron discovered a note left on his door. It suggested a meeting at dawn on Thursday, presumably from Captain Basmar.

Amathar spend some time flying invisibly around the keep and the harbor, peering into windows with detect magic active. He was hoping to locate a magical cloak that would identify assassin candidates. He located a great deal of magic, particularly in the keep, but no magic cloaks. Captain Basmar’s ship, the Silent Night, was not in the harbor.

Wilfong, who had been playing with Basmar and his friends, was found leaving his room in the middle of the night. Amathar first cast Sleep, and then Charm to interrogate him. Thus influenced, he admitted he had magic items (“Tools of my trade”) in the form of a ring and amulet. The ring was protective, the amulet he was reluctant to describe. Aside from that, he claimed to know nothing of the Duke’s assassination aside from rumors after the fact, and was already planning to leave town after Abraham made an announcement about thieves targeting the inn. He did not specify exactly how he makes his living; apparently he wanders from town to town gambling. How that equates to making a living was left unclear.

The rest of the night passed without incident.

Well, the play was very enjoyable, and a more subtle second examination of the backstage revealed no incriminating evidence, so I suspect the playhouse and bard are both in the clear, it certainly appears to be a frame job. We returned to the inn to find that Amathar and Barron had explored the underground tunnels together, and were trying to break into the trapdoors of the other rooms. I lent a hand, helping to force a trapdoor and a picking lock or two, even searching for traps a couple times, but no incriminating evidence was to be found.

That changed, however, when we searched “The Captains” room – we found a disguise kit and a trap on the front door. Also, with his ship, he had ample opportunity to go back and forth between Garroten and Highport. I suspect he might be an active member of the group, if not the actual assassin himself. While he has long hair and the suspect had short hair, that’s modifiable with a disguise kit.

Tib and Amathar also questioned one of the other guests at the inn, a professional gambler and small time thief, but he appeared to not be involved, and was leaving town to avoid undue attention.

Amathar also did some magical reconnaissance, investigating the keep and the docks, looking for the smugglers ship. The keep apparently employs full blooded orcs and half orcs for security – something Highport frowns on, as do most civilizations. While I generally don’t have it against half orcs -they can’t help what they are – I’m not fond of orcs at all, and I wonder if we can roll cleaning up the orc force into our mandate to investigate Garrotten.

I’ll have to think on that one, and perhaps enlist the assistance of Tib, as he knows very well all orcs are evil. Of the Second Earthday of Patchwall

Should Mother ever read these notes, I hope she’s able to understand how difficult this road can be. Authority, we may have courtesy Highport. Cooperation, however, is at a premium. Lacking proper paperwork to prove our position, we’ve resorted to entering the premises of a suspect, without his knowing. We’ve very strong evidence that he’s an assassin, but that does little to make me feel in the right.

While I was investigating elsewhere, Barron had an encounter with the Captain Basmar. Basmar agreed to a smuggling operation with Barron, and when asked about ‘removing people’, agreed that’s very possible, as well. Barron has assured us that no harm will come to the man he’s named (General Parnetti). When we quietly investigated the Captain’s room later in the night, the others found several disguise kits, and other known implements of an assassin. Upon retiring for the night, Barron and Leah also found a note upon their door, asking to meet in two days time. We hope to be able to capture and interrogate the man, so that he may lead us to the leader of the suspected guild.

Of note, that same night while Pryz, Barron, and Amathar were exploring the tunnels beneath the inn, we heard a fierce roar within the inn. The beast sounded twice, and I rushed to defend the patrons. Upon entering a storeroom, then Abraham’s own chambers, we found the sound was emanating from a large portrait of a tiger, which I confirmed to be a magical trap. The innkeeper reported some coin had been taken, but it appears the thief had been scared off. I explained to him our discovery of tunnels beneath his inn, and he rushed off to warn his guests. After Warin and I once more retired to my room, I heard a scuffle next door. A loud night, and not one for sleeping, apparently. I stuck my head out, and found the door next to mine slightly ajar. Opening the door, I found the occupant hurriedly packing his belongings. As everyone in this town seems to be of shady dealings, Amathar quickly magick’d him to sleep. We temporarily relieved him of his weapons, and when he awoke, he was very forthcoming with the mage. He’s scared for his well-being, after the thievery was reported. I don’t believe he’s the culprit, however, as we searched his belongings, and he’s got nearly nothing. We’ve let him be about his way, and I genuinely hope he’s able to find a new life away from this nefarious town.

Finally, during the previous night’s fracas, Amathar has done a light recon of the keep, itself. He’s found many sources of magic, but identified none as a cloak, specifically. Disconcertingly, he’s also discovered a contingent of orcs being kept in the barracks. Abraham says they’re not released to the town, but kept in case of extreme need. Even so, keeping creatures of evil is ill portent.