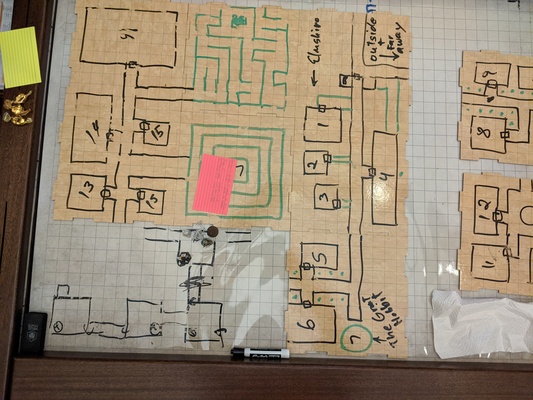 We left the Band of Misfits investigating a murder in Garrotten. We join now the A-men, summoned to Elmshire to investigate and seek a cure for a plague. This portion of the campaign will be treated as a recurring flashback and training montage, in ambiguous continuity to the normal campaign.

Peebles begins the game in Elmshire himself, having tended his family as they passed away from illness. Fydillian, Crystal, Rumble, and Mirabelle volunteered to help after learning of the town’s plight in Greyhawk. They boarded a coach together and were met at the town gate by Mayor Tallbarrow. Gunnar woke up from a nap in a cart filled with plague victims as it passed by the town, horrifying the medical experts. They made it their first order of business to get him to the nearest hospital where he could be kept isolated, despite Rumble’s Detect Magic spell detecting some small magic on the plague victims in the cart and none on Gunnar. The exact workings of the plague remain somewhat opague, but seem to include nausea, vomiting, and eventually pustules that lead to scarring and difficulty healing. Victims who survive wear rags covering their skin to conceal their scarring and perhaps even open wounds.

After Gunner was conducted to the hospital, another plague victim arrived. He had felt fine the day before, but nauseous in the morning, followed by vomiting. His daughter, Gwen, arrived shortly afterwards and reported her mother needed help coming to the hospital as well. Tom Wheelbarrow volunteered his namesake, and the party collected the family together in the hospital while Peebles tried to convince Gunnar (unsuccessfully) that Gunnar needed to remain in the hospital himself. The family’s symptoms were the same – fine yesterday, but woke up with nausea and vomiting. Their usual food sources were their backyard garden, cheese and milk from Bessie the cow, and occasionally the farmer’s market. Staff at the hospital mentioned that plague victims who survive are almost all halflings; humans, elves, and half-orcs who catch the plague seem to die rapidly (though not universally). Halflings seem to have about 50/50 odds of death, other races 80/20.

Meanwhile, Rumble used his Detect Magic to investigate the farmer’s market (the only positive result came from a pig of unusual size). Bessie the cow and the farmer’s house were likewise free of magical influence.

After finishing their questions for the family and getting them settled in, the group met up with Rumble, who had a discussion with Bessie about why her people were sick. She moooed about scratching noises in the night. Moving inside the house, the party searched carefully for vermin. Instead, they found a trapdoor, placed under the bed. Attempts from Fydo and Crystal to move the bed failed, but Peebles remembered that the beds in Elmshire are usually fastened to the floor to prevent theft. He was able to move the bed easily and open the trapdoor. Below was a root cellar, filled with reasonably fresh foodstuffs. The party sent Peebles and Fydollian down to examine it, and those two worthies discovered a secret passage leading to the root cellar of the house next door, which belonged to a halfling named Smith of notably poor disposition. From there a new passage lead onward to the next house, and from there, two passages in new directions.

While the advance party (Gunnar, Peebles and Fydo) explored, the rest of the group (save Rumble, who was conversing with Bessie) debated whether to descend into the cellars. Eventually, they decided to do so, but their debate had unexpected consequences. When Gunnar turned back and removed his weight from part of the floor he was standing on, the whole floor collapsed. Despite grabbing at the walls, he fell heavily to the ground in a bruising impact. Peebles and Fydo struggled to lift him out of the pit without much success, until Fydo’s sensitive noise detected a hint of oil – something had soaked Gunnar’s cloak in the stuff! Hurriedly, Gunnar stripped off the garment and this time Fydo was able to pull him out of the fit.

Unfortunately, the next thing Peebles saw was something at the other end of the corridor striking a match and tossing it into the pit. Luckily Gunnar had escaped, but the explosion that followed brought the tunnel roof down. Passage forward was blocked. The group retreated to the surface, crossed the street, and made inquiries at the house which seemed most likely to have a connected root seller. A silent figure, wrapped heavily in rags, opened the door in response to their insistent pounding…

When they begin to question him, he fled down the trapdoor into the cellar. Gunnar followed immediately, meeting a crowd of … kobolds? One by one, the rest of the group followed, slaying a total of 6 kobolds between them. Gunnar slew one, Fydo two, and Peebles three – one with a sling bullet thrown by hand, two with pots and pans. (Due to this, and some confusion about clerics and slings, I will permit Peebles to take Pots and Pans as a thrown weapon proficiency). Sadly, however, Fydillian, Gunnar, and Mirabelle were struck by the kobold’s weapons, which seemed to bear some kind of a poison. They all felt sick, and the wounds were swollen, but they not yet badly hampered… at least, not immediately after taking the wounds. The Journal of Peebles, Physician-At-Large Maeris,

Our friends and family may finally have some hope. This wasting disease takes a lot of us, particularly the natives. Months have passed, and I still can’t fathom why halflings seem to be the only folks dying. The tall folk seem to get sick, but eventually recover. I’m stumped, Mae.

Them high and mighty in Greyhawk proper seem to have finally taken notice our plight, though. They’ve seen fit to send some help, whether to treat the sick, or perhaps find a cure, I can’t reckon. After we’d done our proper introductions, one of the humans, a big ole man called “Gunnar” stumbled out of a gravedigger’s wagon, nonplussed and confused. I gave him a real talkin’ down, and made the young man go straight to our makeshift hospital. I don’t really see anything the matter with him physically, but he acts like he’s been kicked in the head by a mule. Won’t listen worth a damn, either. Reckon his papa didn’t whip him enough, didn’t teach him a respect for elders or authority.

I left the simpleton to the staff, and made to collect another who’s fallen ill. The folks who came from the city followed along, and when we got to the door, a strange elf was talkin’ to Betsy the cow. Never thought I’d see such a thing. Mayhap there’s more to this sickness than killin’ halflings. Leaving him to his conversation (wouldn’t want to be rude), we took a look in the house. An entire family in this home had taken sick, and we thought it smart to see if anything jumped out at us. In the basement, we found tunnels, going right under the neighbor’s place, that rat Mr. Smith! The old man hollered at us to keep the noise down, as if he could hear us, anyhow! In one tunnel, which seemed to be going across the street above, that Gunnar fell right into a pit. The Gods certainly made him a big guy, but they didn’t exactly waste any senses on him. While we pulled him out, a brief flicker of light was the only warning we had before some damn fool lit a flint, and tossed it into the water and oil below! No one was really hurt, though. We didn’t find much in them tunnels, but they’re clearly not part of the original basement.

We guessed where that tunnel may have lead, and believe it’d have been across the street. The house directly in line has been abandoned for a few months. The previous occupants had all taken ill early on, and no family had the nerve to move in. We knocked on the door, and, well Mae, I don’t really remember what happened after! It’s all a blur of kobolds, swords, and tossing cookery. I guess we killed the kobolds. I hate to see such violence in my little town, but when nasty little creatures such as they are involved, the people must be safe!

Now, what were kobolds doing dressed as (and pretendin’ to be) halflings?